To fully understand the relationship between climate change and water stress, you must first have a firm grasp on how the Hydrologic Cycle works. Whether you remember or not, most of us learned about this in grade school. However, it is not a concept we tend to frequently think about – sans those in a profession requiring them to. So, we will take a moment to remind ourselves how it all works. Water is evaporated from the surface of the ocean. As it cools, it condenses and becomes the clouds we see in the sky. Next, that moisture (in the form of clouds) travels around the world until it eventually falls in the form of precipitation. When the water hits the ground (if it is not rained directly back into the ocean), one of three things will happen. Some of the water on the ground will evaporate back into the atmosphere. Some water will penetrate the surface of the land and become groundwater. The groundwater will either make its way back to oceans, rivers, or streams, or evaporate through transpiration (by plants and trees). The remaining water that fell on the surface will remain on the surface and flow into lakes, rivers, and streams as runoff (note that runoff is not treated). Many people are more visual learners (myself included). If you are having trouble visualizing this process, look at the graphic below courtesy of http://www.conserve-energy-future.com. 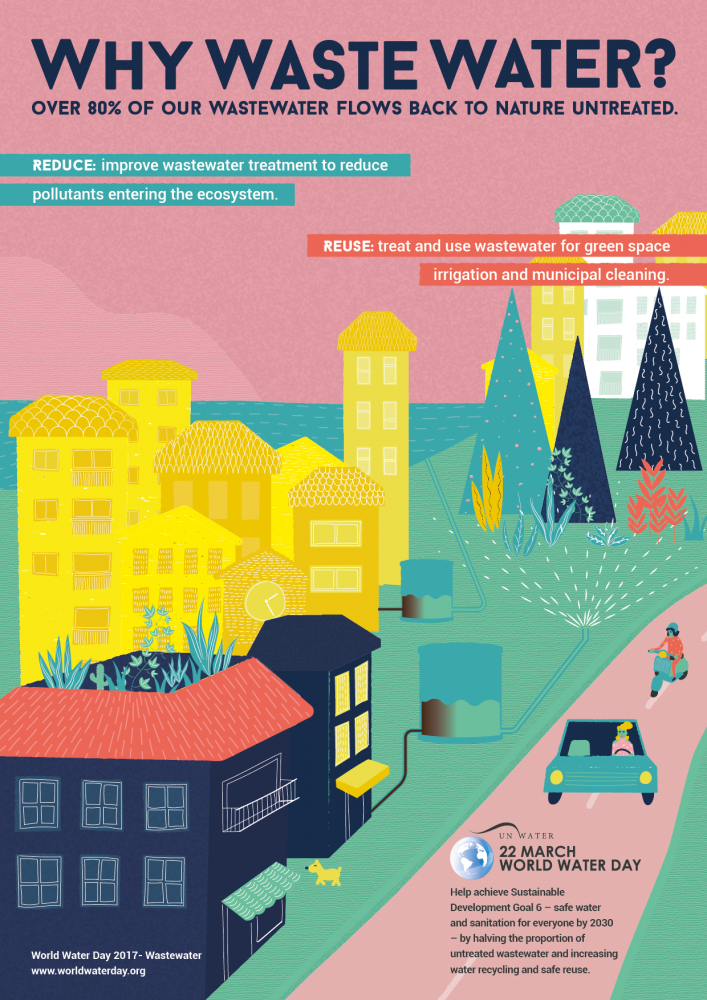 How Warmer Temperatures Change the Cycle

Not all precipitation falls in the form of rain. Similarly, not all precipitation that falls to the surface as rain stays in a liquid form. Temperature plays an important role because it can change the properties of water. Depending on temperature, water may fall from the sky in the form of snow or ice, or it might even change once it hits the ground. The property the water is in significantly affects how quickly it moves through the Hydrological Cycle. Water on the surface (or in the ground) in the form of snow or ice can remain in the same place for months or even years. However, if the overall temperature of the air and surface of the Earth increases, we have less snow and ice, and more liquid water. WIth more liquid water, we will have more water running through the Cycle at a faster rate. The speed and quantity of water in the cycle will increase. As you may expect, this will result in larger amounts of rain, more often. The even more interesting part of this is that we will only see larger amounts of rain, more often in certain parts of the world. Other parts of the world will see the opposite – smaller amounts of rain, less often. Due to where increased evaporation happens and the movement of clouds, only certain places will see more rain, while other places will see less.

Too Much or Not Enough

When talking water, too much and not enough can both be dangerous. From a consumption standpoint, a human being can die by consuming too much water (hyperhydration) or, more commonly, by consuming too little (dehydration, loss of over 15-25% of total body water). From a groundwater standpoint, a human being can die or be significantly affected by too much water (flood; or contamination of freshwater from excessive runoff), or too little (crops will not grow leading to hunger; or no proper sanitation leading to disease). Like most things in this world, the human body needs a balance of water to be healthy.

Changes in the Hydrological Cycle and Water Availability

As climate change alters the Cycle, predictions say that we will see a significant increase of places with too much water and places with too little. As temperatures increase, we will see more water available for evaporation (in the form of surface water, oceans, and transpiration). There will be more condensed water in the clouds which will cause more water to fall in certain places in shorted amounts of time during bigger storm events. Stormwater systems in the fully-developed world will be overwhelmed and result is a significant amount of runoff back into lakes, streams, and rivers untreated. With enough frequency, the quality of water available for drinking and bathing will begin to degrade and further human intervention will need to be implemented.  In other places, smaller amounts of water will fall at a decreasing rate during infrequent storm events. Over time, less and less water will be available for drinking and bathing and further human intervention will need to be implemented.

The price we are paying and will continue to pay related to water stress, both monetarily and in human capital, is too great to allow climate change to continue moving forward at the rate it is now. The developed world may be able to delay the repercussions for a period of time by throwing more money at the problem, but that is not a sustainable solution. The underdeveloped world does not have the resources to delay the repercussions and will likely see brisker consequences.