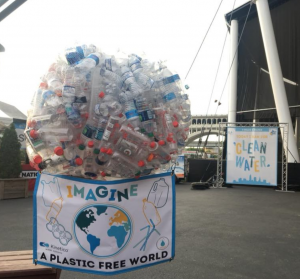 Did you know? Only about 9% percent of plastic is actually recycled, with the overwhelming majority being wasted (Source).

Since the mass production of plastic began around 1950, more than 8.3 billion tons of plastic has been created. Most of this plastic is used to produce disposable products which ultimately become trash (Source).

“This kind of increase would ‘break’ any system that was not prepared for it, and this is why we have seen leakage from global waste systems into the oceans,” says Jenna Jambeck, a University of Georgia environmental engineer (Source). In fact, by 2050, there will be more plastic than there are fish in the world’s oceans (Source). This number is not only a major threat to ocean life, but also people who rely heavily on fishing for food security.

Researchers at Colorado State University (CSU) may have created a solution to this plastic recycling problem (Source). Eugene Chen, a CSU chemistry professor, says his lab has created a polymer that is very similar to plastic that can be chemically recycled and reused infinitely (Source). When plastic is broken down, it is typically broken down into molecules that must go through multiple chemical processes and can’t be easily restructured into plastics or other items (Source).

“Polymers, of which plastics are one type, are made from chains of repeating molecules. The new polymer developed by Chen’s lab shares important characteristics with plastic such as strength, durability, lightness and heat resistance (Source).” This polymer can also be easily broken down and return to its original shape for easy reuse.

Chen says further research will be done before the polymer can be commercially produced. Chen’s lab has received a grant to do further research to find a more efficient and more cost effective process of creating a similar polymer. The researchers believe that this polymer discovery could greatly reduce plastic pollution if it is introduced in the everyday marketplace (Source).

At Drink Local Drink Tap, we always encourage buying only what you need, borrowing or reusing, and then a last option- recycling, this could be a step in the right direction for some products.