The Great Lakes are a fresh water source, a flourishing ecosystem, and are associated with a 7 billion dollar / year fishing industry. This could cease to be reality all because of one type fish; an invasive species known as Asian carp. More specifically the bighead, black, grass, and silver carp, who are commonly lumped in the term “Asian carp”. None of these carp are native to the Great Lakes, hence the reason they are called invasive species. These carp, like many other fish, were introduced to create new fisheries and increase fishing profits. In some cases, they were used to establish new fish communities (source). 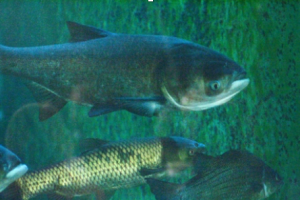 Asian carp can destroy ecosystems very quickly by introducing foreign diseases to the lakes, destroying native breeding grounds, and demolishing the food supply. These invasive fish will eat plankton, which native mussels and fish depend on, and even plants which changes the river flow and shoreline vegetation. With that amount of plants, mussels, and plankton being lowered in the Great Lakes, the ecosystem becomes unbalanced and the native species that depend on the food sources suffer (source). Carp can also lower water quality, which can kill of sensitive organisms like mussels, who help filter our water (source).

So, what is being done to stop them? In policy, the Asian Carp Prevention and Control Act amends the Lacey Act, which prohibits the importation and interstate transportation of species designated as injurious, by adding on Asian carp to the list of the “injurious wildlife”. The CARPACT of 2010, the Stop Asian Carp Act of 2011, and the Upper Mississippi CARP Act of 2012 all have the same agenda which is to conduct studies on the fish and waterways, and make sure the fish do not invade any new territory (source). Other than policy helping stop the spread, scientists have been coming up with ways to keep them from moving from the Mississippi River to the Great Lakes. 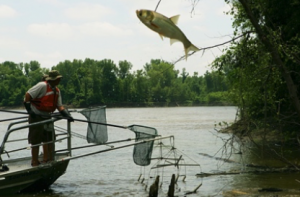 Experts have determined that hydrologic separation is the best way to solve this issue. (separating unwanted items from water), because other methods had greater uncertainty and lower levels of effectiveness (source). In addition, electric fish barrios are being used and prove to be fairly effective. One prototype barrier and a second barrier were installed at a choke point which was the Chicago Sanitary and Ship canal (source). Unfortunately, nothing has had a 100% success rate yet.

What can you do?

Spread awareness and educate people on the topic (i.e. share this blog post). Writing to your state senator and congress people to let them know this is something the people care about (i.e. healthy lakes and clean water). Remember, there is nothing worse than doing nothing! Find your legislators here.