For more on DL.DT’s point of view, click here. 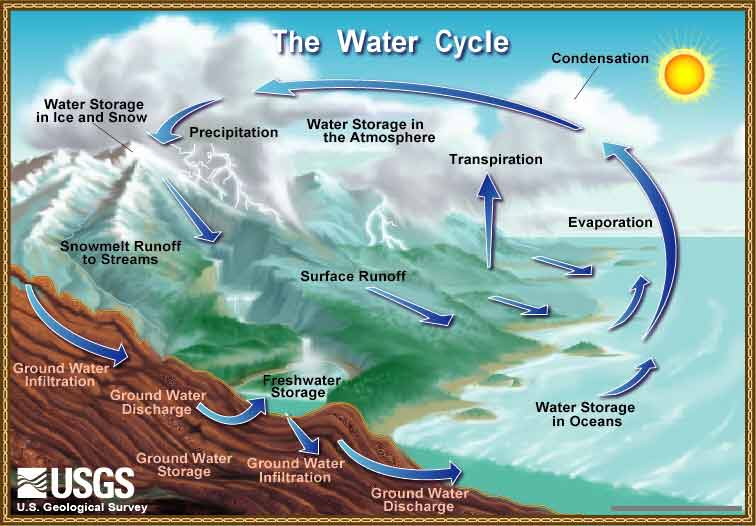 There is a lot going on in the graphic above, basically, it is demonstrating the delicate balance of precipitation and evaporation (and everything between). Fresh water comes from water being absorbed from the ocean and rained down on land and trees and from melting snow on mountains. This water either goes into the ground, into freshwater storage, or back into the ocean.

Enter climate change and the overall increase of the Earth’s temperature. With warmer weather comes increased evaporation. This evaporation leaves some areas significantly drier while increasing rainfall in others. As areas dry out, the demand for water increases while the supply decreases. As other areas get more rain, management of all that water becomes increasingly more difficult contributing to flooding and more runoff of hazardous chemicals into the water supply reducing the quality significantly.

In short, a shift in the balance of the water cycle, due to climate change, decreases water supply in some places and water quality in others. Nobody wins.

The impact of this can been seen locally and globally. In the areas around the Great Lakes Basin, an increased occurrence of heavy precipitation events completely overwhelms sewer and water systems. The resulting flooding causes significant runoff of pollutants into our lakes, rivers, and streams, increasing the demand of water treatment plants. In countries closer to the equator (that are traditionally warmer and drier anyway), the issue intensifies. In Uganda, where Drink Local. Drink Tap. does a significant amount of work, accessible water is already extremely scarce. The little water that is accessible is often contaminated and not safe to use. When we add in the effects of climate change, there is a serious problem. Some areas will see even less water than they do now. At the same time, other areas may see an increase, but it will come in heavy downpours and other intense storm events that will overwhelm the systems in place and contribute to even worse water quality.
The droughts and more intense weather systems we are seeing in the United States, despite its’ relatively temperate climate, should be seen as a microcosm of what is taking place globally. Specifically, in the underdeveloped world, people are faced with the same problems, but due to a lack of resources, they see significantly hastier consequences.